Engineering for the project was by Robison Productions.

We did the initial recording sessions for this project in 2010 at the LSU School of Music Recital Hall. There was a final recording session followed by editing and mixing in 2013. Then life happened. If I remember correctly, there were new jobs started, children born, and mechanical licenses that proved difficult to track down. But, this delightful collection of music is finally available for all to hear. Please be sure to check it out! Engineering on the project was, once again, a team effort. Recording was done at SUNY Fredonia by Bernd Gottinger, I did the multi-track editing (at 96k) here in Baton Rouge, and it was then mixed and mastered in New York by Alexey Gorokholinsky. It was, as always, a pleasure to be part of the team!

CD’s can be ordered from HBDirect and ArkivMusic. Impaired Faculties released their double CD, Lipstick and Whiskey, back in November of 2015. The music can be described as a guitar-driven mix of power-pop and southern gothic. The band consists of a group of five college professors from Southeastern Louisiana University in the fields of communication, history, health studies, management and physics. They are Bill Robison, guitar and vocals; Joe Burns, guitar and vocals; Ralph Wood, drums; Randy Settoon, bass and vocals; and Dan McCarthy, keyboards, guitar and vocals. Their raison d’être is “a love of music, as well as a desire to give back something to the arts.”

CD production for this project was a real group effort. The band recorded many instrumental and vocal tracks at SLU or in their own homes, and we recorded the remainder here in the Robison Productions studio. Band member Randy Settoon mixed the “Lipstick” disc (the first ten tracks), and I mixed the “Whiskey” disc (the final ten tracks). All-in-all, it was a rockin’ good time.

Lipstick and Whiskey is available on iTunes, CD Baby, and other online outlets. For more information about the band, upcoming shows,and charity events check out their website and Facebook page. I recorded Hsiaopei and Chialing at the Louisiana State University School of Music Recital Hall and edited and mixed the project in my studio here in Baton Rouge. This was another project made possible by the miracle of file sharing on “the cloud.” My thanks to the performers for their patience with our tri-state editing process.

Congratulations to Hsiaopei and Chialing for this challenging and significant work! Alexander Russakovsky (cello) and Amber Shay Nicholson (piano) recently completed work on an ambitious collection of music for cello and piano. The recording, Rachmaninoff & Prokofiev: Cello Sonatas, was released in April 2014 by Brilliant Classics. The CD includes music by Glazunov and Tchaikovsky as well as the sonatas by Rachmaninoff and Prokofiev.

From an engineering perspective, this was a team effort. The project was recorded in Pennsylvania by Bernd Gottinger, edited in multi-track (at 88.2 k) by me here in Baton Rouge, and then mixed and mastered in New York by Alexey Gorokholinsky. It was a pleasure to be included in the project.

Congratulations to Amber and Alex on a beautiful CD! Featured at the event was the premiere of a new composition by composer Robert Kyr entitled Waging Peace. The performance was held at Broadmoor Baptist Church in Baton Rouge and involved an interfaith choir, narrators, and instrumentalists from over twenty different congregations in the Baton Rouge area.

The powerful text for this new work was derived from the words of actual victims of violence in Baton Rouge: primarily those who have lost family and/or friends. Additional information about the Waging Peace Initiative can be found at the website of the Interfaith Federation of Greater Baton Rouge. There you can find the complete text for Waging Peace, more information about the composer, and an order form for the CD. It’s well worth a look. Here’s some news about an older project. Way back in September of 2010, I recorded a work for composer Daniel Perttu and then kind of lost track of the project. The piece was Gloamin: A Fantasy for Flute and Piano and was performed by Adrea Kapell Lowey, flute and Dr. Yuling Huang-Davie, piano, both of the University of Louisiana at Lafayette. We did the recording at the Louisiana State University School of Music Recital Hall. Daniel recently informed me that the piece has been released on a compilation album entitled Lock & Key: New Chamber Works on the Navona Records label.

The CD is available at Amazon and the Navona Records store.

Congratulations to Daniel on a job well done! A new CD of Scottish fiddle music, The Sheiling Braes, has been released by Melinda Crawford.  The CD includes original and traditional Scottish fiddle tunes played by Melinda (fiddle), Dan Perttu (keyboards), and a number of colleagues (percussion). I edited and mixed the final tracks here at Robison Productions.

This project was particularly interesting for me in a couple of ways. First of all, after a long string of classical music projects, it was nice to do something a little different. Mixing fiddle tunes has its own set of challenges and rewards. Secondly, this was a project made possible by the miracles of modern technology. Although I consider Melinda and Dan to be friends as well as clients, I have never actually met them. They did the original multi-track recordings themselves in their home in PA and then shared the raw files with me via DropBox. I edited and mixed the tracks in my studio and sent trial mixes and revisions back the same way. It took some time, but it worked remarkably well.

For more information on The Sheiling Braes and Melinda Crawford, please visit her website.  The CD can be purchased at CD Baby and other online outlets. Have a look and listen! When Hope Still Had its Chance: The Songs of Keith Gates has been released on Centaur Records! Performers on the CD include McNeese State University faculty members Carol Lines, soprano; Lina Morita, piano; and Judy Hand, flute. The CD was recorded by Robison Productions in Lake Charles, Louisiana at the Shearman Fine Arts Theatre on the McNeese campus. This beautiful new hall proved to be an excellent venue for recording – the perfect space for the masterful performance delivered by the three artists.

More information about the composer can be found at the Keith Gates website. CD details can be found on the Centaur site. Check them out!

Congratulations to Carol, Lina, and Judy! 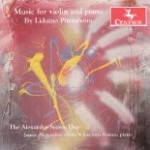 Music for Violin and Piano by Liduino Pitombeira has been released by Centaur Records! This recording of five sonatas by Brazilian composer Liduino Pitombeira is performed by the Alexander-Soares Duo. The Duo is Luciana Soares (piano) and James Alexander (violin), who are both on faculty at Nicholls State University.

Engineering was done by Jeffrey Rassier (Sonata No. 3) and me (Sonatas 1, 2, 4, and 5). Click the image at the left for the Centaur Records website and more information.

Congratulations to Luciana and James!